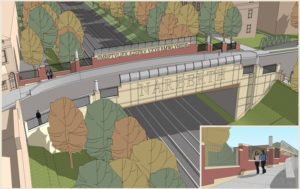 Q. What is the status of this project?

Q. Will the bridge be closed to all traffic during the demo/construction?

A. Yes. Detailed detour routes will be posted. However, pedestrian access over the bridge will be provided through the duration of the construction phase of the project

Q. How long will the bridge be closed to traffic?

A. At this time, the project is anticipated to last between 18-24 months.

Q. Will detailed plan sets of the bridge be available to review?

A. Yes. As soon as plan sets are finalized and approved by the project engineer, Borough, and PennDOT, they will be posted below.

What are you looking for?

COVID-19 INFORMATION (1/1): A webpage has been created for all Borough-related COVID-19 information. Please click/tap on this link to be forwarded to the web page WEB PAGE